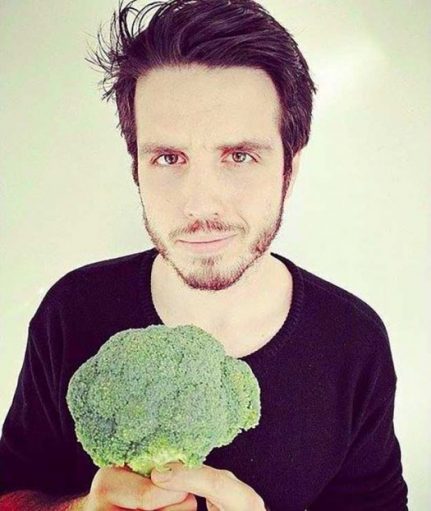 Growing up, I thought vegans were weird. They probably didn’t eat meat for some religious reason or because they were sappy animal-lovers ignoring the truth about the world: that there is a food chain, with humans at the top. They were normally pale and weak, probably deficient in loads of stuff. Stupid vegans.

I on the other hand was a normal meat-eating lad. In fact I think I probably ate more meat than was normal. I loved meat, all meat. I ate it every day, often with every meal. I tried Bison, Kangaroo, Crocodile, Zebra, Springbok, Frog’s legs and Gnu (it’s like a buffalo). Why wouldn’t I? Meat was good for you and delicious.

Fast forward to 2014. I was 25 and in the middle of a UK tour working as an actor. Too many bacon sandwiches and late-night kebabs had made me balloon to 15st (95kg or 210pds). I came back after a mid-tour break and literally couldn’t fit into my costumes. I wanted to make a change in my life and like any self-respecting millennial, I turned to Netflix.

I started watching documentaries about the food industry, vegetarianism and veganism and gradually I started to think that going vegetarian was a really good idea for me, for animals, for the planet and for other humans. I started slowly, deciding to eat meat only one day a week, like a cheat day. But pretty soon I found I didn’t want to eat meat at all and I went full veggie. Fast forward another 5 years and I’m 100% vegan!

The weight started falling off. I’m now 13.5st (86kg or 189pds) of pure veggie lad. But this site isn’t about weight loss. It’s about making it easier to be vegan and convincing you that you can do it too. It’s about proving that vegan food can be exciting and delicious.

I’m on a mission to find the best veggie recipes, restaurants and products and share them here with you.

Welcome to Veggie LAD, I hope you like it!